Roses and Thorns: Well, That was Interesting

It was No. 1 Denver versus No. 3 UND this past weekend from Magness Arena in Denver and what a series it was.

Storylines galore in this match up.

Friday night, the Fighting Hawks were stunned out of the gates and trailed the Pioneers 3-0 midway through the second when UND head coach Brad Berry took his team's timeout.

From there, it was pretty much a Green and White avalanche (see what DDC did there? Avalanche... Denver... NHL... get it? :D) as the Hawks stormed 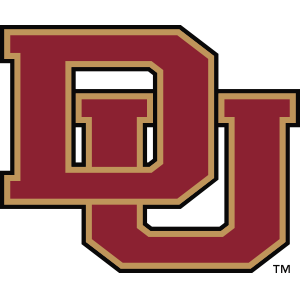 On Saturday, DU got the split in a 4-1 win on the back of three power play goals. 'Nuff said about that, right? Na. We'll get to that later.

Bear with DDC, but this is a wee bit longer than normal, but he swears, there's some entertainment involved.

Check out what stood out to DDC in his Roses and Thorns review of the Pios and UND.


Coming into this weekend, DDC opined that while UND has been impressive in may ways so far this season, this series against DU would be a true test that would show the college hockey landscape, largely, who the Fighting Hawks really are. Indeed, the Pioneers proved they are the real deal (albeit with some chinks in the armor) but the Green and White took one from No. 1 in stunning fashion at Magness Arena on Friday and if it weren't for some.... well... DDC will touch on this later... we'll say... interesting calls...., had a chance for the sweep despite a 4-1 loss on Saturday. The college hockey season is indeed a marathon, not a sprint, but UND staked its claim as a team that is going to continue to make noise as a contender the calendar turns to 2018.


DDC is going to share a bit of a secret that his droves (😉) of fans may not know about him. DDC is proud to say he's a wrestling fan. He understands that no, it's not real, but indeed, it is scripted. You know what, he'll say it... IT'S STILL REAL TO HIM, DAMMNIT!  Annnnyway, DDC is going to steal a phrase from WWE legend Mick Foley (sorry for this, David Larson) and say one thing about this UND hockey team. They've got testicular fortitude.

Ok, so this video is talking about Bill Simmons getting fired from ESPN for this, phrase, but it's all DDC could find... but the point still stands.

At one point in the first period, the Hawks were being out shot 21-2 on the road against the No. 1 team in the country and after a second period shorthanded goal, UND trailed 3-0. But man, did this team show the guts and fight of a team that did not want to lose and rallied back for a ridiculous 5-4 victory, outshooting DU 34-13 after their horrendous start. This will be an important win for the Green and White to look back and know that in whatever situation they are in from here on out, they have the fight to get back and win hockey games.


It's been said several times this year, but UND is truly a product of its depth. In Friday night's stunning comeback, the Green and White saw 13 players tally points and got goals from Zach Yon and Joel Janatuinen, both of which was their first of the season and Johnny Simonson's game-winner with 2:31 left was just his second on the year. On Saturday, freshman Matt Kierstad, inserted into the lineup after an injury to Casey Johnson on Friday, opened the scoring with his first of the year. While the Hawks may lack a bit of top end scoring (DDC will touch on this later), the depth of this team to be able to roll four lines against any team and get scoring from all over the lineup is this team's identity at this point of the season. Couple that with a defense that is playing incredibly well, UND has the pieces in place to stay with anyone in the NCAA.


DDC does believe that depth is a good thing and that definitely helped UND on Friday, its lack of top-end scoring is something this team lacked. The Fighting Hawks have just three players with double-digit points on the season as junior Nick Jones leads the team with five goals. In contrast, the top trio of Denver, Henrik Borgstrom, Troy Terry and Dylan Gambrell showed this weekend what top-end scoring looks like. The trio combined for 11 points on the weekend with Borgstrom and Terry both notching five-point weekends. Terry was particularly impressive, making plays all over the ice all weekend against UND. The Green and White need players who've shown scoring ability throughout their careers (ie. Shane Gersich and Austin Poganski) to step up and tally some points for UND to take the next step.

Ugh, DDC really does hate being "this guy", but the referee crew in Denver certainly made a difference this weekend. He's going to do his best to make this quick, but it can't go without saying that officiating played a part all weekend long. On Friday night, the NCHC crew made it a point toss players from the faceoff circle in a torrid fashion. Ok, DDC gets, they were trying to prove a point about faceoff infractions, but this was ridiculous. At one point, DDC counted five-consecutive faceoff tosses. It's just too much. Then on Saturday, the officiating crew literally changed the game. With UND sporting a 1-0 lead in the first, Cole Smith was issued a five-minute major and was tossed from the game for a penalty that lead to an injury to DU defenseman Adam Plant. While the play was certainly interference, DDC believes the call to make it a major was, and he's being nice here, a stretch. Take a look at the hit in question (Credit to the Goonie!). DU tied the game at 1 on a Borgstrom goal. You make your call, but that hit, to DDC, wasn't malicious, high, nor did it come at high speed.

The big calls kept coming and after a Pioneers goal to make it 2-1 early in the third, UND appeared to tie it on a nifty passing play on a 2-1 rush when freshman Collin Adams fed fellow rookie Jordan Kawaguchi beating Tanner Jaillet. Just before the faceoff, however, the refs got together after some, shall we call it, "protesting" from Denver head coach Jim Montgomery. After review, the officials ruled Adams made enough contact with Jaillet to overturn the goal on goaltender interference. Check it out... the play in question starts at 2:42 in the clip:

Even further, here's a still shot of Adam's stick touching Jaillet's pad, but the point here, the pass to Kawaguchi has already been made. 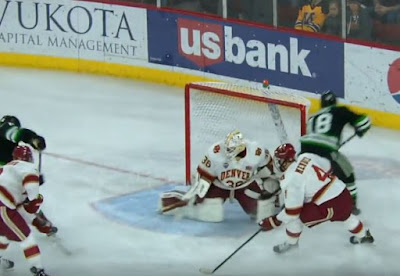 In short, did that contact prevent Jaillet from making the play? DDC's take? Absolutely not. The shot comes an instant later... Jaillet is already beaten. How was this play even sent for review? That may be even the bigger mystery here. Montgomery told local media after the game he challenged the play, which would have put DU's timeout on the line. If that's the case, why did the crew stand around to talk about it for several minutes? It was also reported that the officials told the UND bench that the linesman called the interference. Is this the case? If indeed it was, that may the the first time DDC has ever heard of a linesman making that kind of call. This case was echoed by other media. And if it were the linesman, again, why was there a discussion before the review? It seemed to DDC that this play wasn't going to be reviewed until Denver made a case for it. Simply bizarre.

DU then went on to score two more goals, both on the power play, to pace a 4-1 win and a split.

The power play goals are the biggest note here. Remember the major penalty to tie the game at 1-1? Well, that was only the start. The final tally of penalties called on Saturday night? Denver -- 1 penalty for 2 minutes (UND had :33 seconds of power play time). UND -- 8 penalties for 27 minutes (per Brad Schlossman of the Grand Forks Herald, DU had 13:41 of power play time). That is absolutely ridiculous. The Hawks were certainly guilty of some poorly-times penalties in this game and warranted a big chunk of those calls, but are you meaning to tell DDC that DU did not commit a single penalty after the first period? Not a single stick in the skates? No hook around the waist? No interference? Nothing?

It was a sad state of affairs on Saturday that really overshadowed a wonderful weekend of hockey with No. 1 taking on No. 3, but what can you do?

Holy smokes, so much for keeping that short, eh?

Moving on. Thanks for reading and come back later for DDC's take on UND vs. Union in a Turkey Day weekend tussle from the Ralph.