Alright, enough with the prognosticating, the analysis, the "my-team-is-better-than-your team", the nonsense, the memories and the tomfoolery. 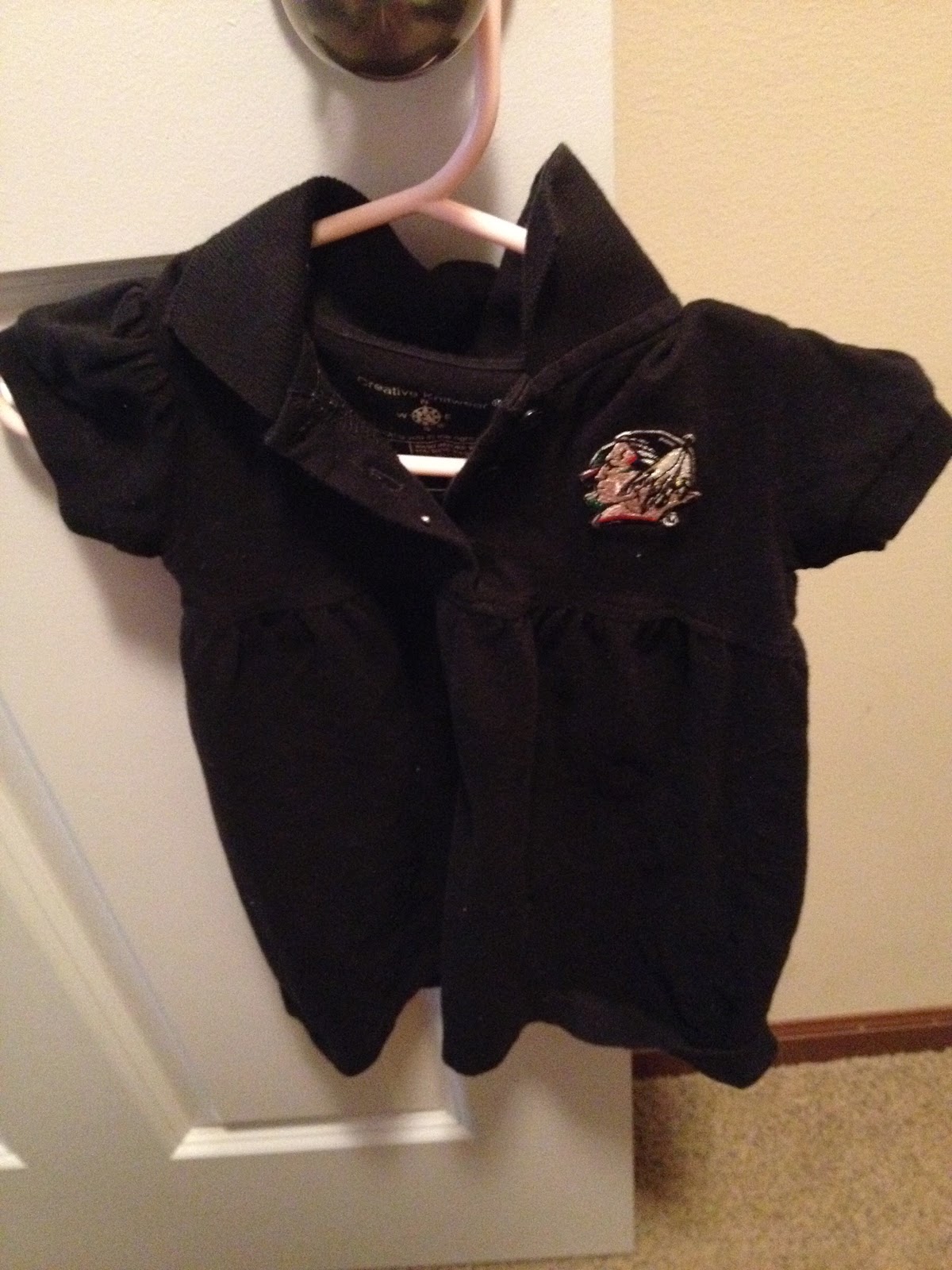 DDC's little one is certainly ready for tonight. She'll be decked out in her "business suit" today.

After an exhausting 11 days of trudging through stats, comparisons and every angle of the rivalry, UND and Minnesota will finally face off  at 7:30 CST from the Wells Fargo Center in Philadelphia at the 2014 Frozen Four.

DDC has refused to make a prediction for this game during the longest 11 days that he can remember, because he's seen this rivalry bring out the best in both teams too many times.

Cliches are beloved by sports fans and this one is especially perfect for Thursday's game. "When these two teams get together, you can throw out the record books."

On paper, the general consensus from most covering this match up gives the nod to the Gophers. UND head coach Dave Hakstol noted early this week that Minnesota has "earned the No. 1 seed" and has played into the being the favorite. DDC agrees. Minnesota has been a dominant team for long stretches this season.

One thing Minnesota hasn't seen yet this season, in DDC's opinion, is a team that is similar to its own, up and down the lineup. The Gophers pride themselves on depth up front, as does UND; the Gophers herald a fast and skilled, puck-moving defensive corps, so does North Dakota; Minnesota has a talented sophomore goaltender, so do the Sioux.

Get the drift? These two teams are very equal. Throw in a rivalry game for a chance to play for a national championship and this game is nearly a toss up.

This is why DDC has had a tough time picking this game.

So, what is going to be the difference maker?

The last time UND made the Frozen Four in 2011, they expected to win a national championship. It's Minnesota's time in the spotlight, this year.

Will this cause Minnesota to be tight in this one? DDC think so. Pressure is the beast that no one likes to carry. It's hard to be the team that's "supposed to win."

North Dakota wasn't supposed to be in this position. They showed a loose style of play in their last three games (5-0 win over WMU in the NCHC third place game included). DDC thinks this is the difference maker.

UND plays with a large chip on their shoulder, sticks the pedal to the medal and stymies a potent Minnesota attack. That, and Gothberg plays the way he did against Ferris State.

BC and Union face off in the early game at 4 pm CST in what should be a dandy. In a change from UND/Minnesota, these two teams are the opposite of each other in it's two opposite teams battling in this one. It'll be BC's offense, led by Hobey Baker winner elect, Johnny Gaudreau versus the stout Union defense led by Hobey Finalist Shane Gostisbehere.

DDC called UND vs. Union at the start of the tournament. Why stop now? Union will have it's hands full with BC, of course, but DDC likes their 'D' and hates BC's depth. Union slows, not shuts down, but slows, the top line of Johnny Hockey and Kevin Hayes and moves on to Saturday.

Posted by Unknown at 2:38 PM No comments:

We've come to the culmination of the countdown and DDC again welcomes you back for No. 1.

Although not present for the game, DDC remembers this game and this moment more than any he's ever experienced during the rivalry and the jubilation of this moment is unmatched.

Watching this game and this play with 20 of his best friends in the basement of his fraternity house will be a memory that will never be forgotten for DDC.

So, without further ado... No. 1... Chris Porter's game-winning wrap around goal to send North Dakota to the 2007 Frozen Four.

Chills run up DDC's spine every time he watches this play, still to this day.

DDC's fondest memory of catching a fellow fraternity brother as he jumped into his arm in celebration is one of those things that people remember for the rest of their lives.

The team's celebration, nearly breaking the glass as the all pile on each other, is amazing.

This is why people watch hockey and love this rivalry. This game had it all. Overtime. The captain. Sioux vs. Gophers for a trip to the Frozen Four. This is why people love sports and this is why the greatest rivalry in college hockey should be played every year, no matter what.

So, that's it. Thanks for joining me for the countdown. A lot of fun as been had and DDC hopes he has done everything in his power to get you ready for tomorrow.
Posted by Unknown at 3:36 PM No comments:

Thanks again for visiting Daddy Dump and Chase to tune in to his Top 10 moments in the UND/Minnesota rivalry.

We are just two days away from renewing hostilities and if No. 2 doesn't get the mojo going, I'm not sure what will. Maybe No. 1, but, let's give this one a try.

Let DDC set up the scene a bit. UND had dominated the Gophers in the Game 1 of this WCHA playoff tilt with a 6-0 victory, but Minnesota battled back for a 4-2 win in Game 2. The Sioux took a 2-1 lead before this play, but were visibly slowing as the Gophers tried to battle back. Then...
https://www.youtube.com/watch?v=bsxyzGkmAgg

Again, the sound of this behemoth hit is what DDC remembers. Note the bang Brad Malone gives a Gopher player just 15 seconds before the hit on Wehrs. That was a good one. Matt Frattin's hit is that much heavier.

Frattin was called for a five-minute major for charging. He clearly left his feet, but it's DDC's take that Wehrs had his head down and caught Frattin coming at the last moment, dipped his head, thus causing a lot of the problem.

This moment isn't about the penalty. It's been debated for too long on message boards and the like. This hit got the Ralph rocking, the Sioux killed off the five-minute penalty and UND cruised to a 4-1 victory, ending the Gopher's season.

This moment also generated the coolest, single hockey photo that DDC has ever seen.

DDC's former colleague and Grand Forks Herald resident photog extraordinaire John Stennes gave the world this piece of history that, DDC's sure, is still plastered on many a laptop and Twitter background to this day. 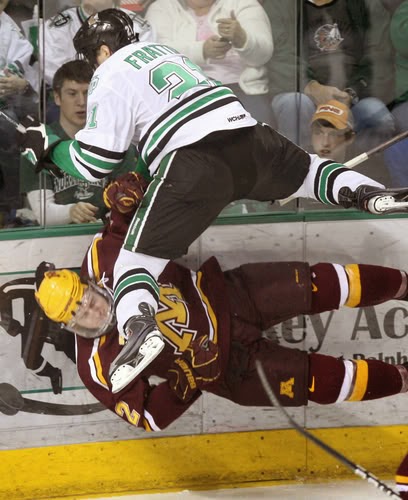 “I decided to try to get the boys going — big hit, a costly five minutes,” Frattin said of his hit on Wehrs. “But it was great PK for our team. That was a huge momentum swing for us and we didn’t look back after that.”

Call it what you will, but it was for sure one thing and that's memorable.

For some extra fun... check out wrestling announcing royalty Jim Ross' call on the Frattin destruction

With that, thanks for coming back to the countdown of the Top 10 moments in the UND/Minnesota rivalry.

No. 3 simply needs two words to be remembered: The Timeout.

DDC could not find much on the web in terms of highlights from the game, but "Through These Doors" did an excellent job in summation. The good stuff starts at 7:15.

Trailing 3-0 in the semifinals of the 2012 WCHA Final Five, UND was gassed after a long shift and with 5:53 left in the second, Sioux head coach Dave Hakstol took his timeout.

Six goals and 26 minutes later, UND had one of the most memorable moments in the rivalry's history under their belt with a 6-3 win.

A Derek Forbort goal to make it 3-1 just 50 seconds after the timeout, gave UND life. Then, goals by Michael Parks and Brock Nelson just 30 seconds apart in the third, tied the game at three and the 'X' went nuts. DDC again remembers how loud the arena was and remembers watching stunned Gopher fans, that just 20 or so minutes earlier, were up, cheering and taunting, slouching in their seats with mouths agape.

Senior captain Mario Lamoureux gave UND the lead just 3:41 later and North Dakota never turned back. Corban Knight and Lamoureux netted the Sioux two more goals and the rout was on as UND outshot the Gophers 17-2 in the third period.

What a game. The power of crowd gathered at the affectionately-named "Ralph Engelstad East" was absolutely rocking. An amazing moment.

Just two more moments left. Tomorrow's No. 2 moment? We'll put it this way ... it was controversial and blew up the message boards. Not the only thing to be "blown up" in this moment, either.

Thanks for coming back to DDC's Top 10 moments in the UND/Minnesota rivalry.

No. 4 is very near and dear to DDC's heart as it piggy backed one of his favorite weekends his college career.

After a comeback 5-3 win on Friday night on the heels of a two-goal night by Ryan Duncan, UND had a chance for the sweep.

However, after a 2-0 lead under eight minutes into the game, Minnesota rattled off three straight to take a 3-2 lead after a Mike Howe power play goal at 15:58 of the first.

Full disclaimer here: DDC did not actually witness this play as it occurred, due to an argument with a jawing Gopher fan, but he was in house with 10 or so of his fraternity brothers.

Bina's 178-foot shorthanded goal through the wickets of Gopher goalie Jeff Frazee knotted the game at three and set the tone for a 7-3 rout and a sweep at Mariucci for the Sioux.

As the clock ticked to zero and the Gopher student section emptied out, DDC's group of friends made the bold move of sitting in the vacated seats. Water bottles, pretzels, etc., showered down on these brave Sioux fans, but the memory was well worth it.

"A bouncing puck for a goal."

Frank Mazzacco's call for FSN still replays in many Sioux fans, and more than likely, many Gopher fans heads every time they see a bouncing clear near the goal. DDC still to this day says "Robbie Bina" every time a goaltender has to play a puck like this.

Well, hockey fans, we're down to the Top 3. Come back tomorrow for No. 3 to remember that left Minnesota fans green with envy.
Posted by Unknown at 2:59 PM 3 comments: